Jack had a problem. In order to escape the hungry giant "Fee, Fi, Fo, Fumming" after him and deliver the golden eggs safely to his mother he needed to figure out how he could carry them down the beanstalk and still use his hands and arms for climbing! Once again, our Kindergarten, First and Second Grade engineers were put to work solving this problem. After all, wouldn't it be terrible if Jack kept dropping the eggs and shattering them below? Nobody would want to buy a golden egg that was shattered into a million pieces!

First, they set to work drafting their designs on our design tables.

Next, our engineers put their designs into practice as they built prototypes to test with plastic eggs.
They went shopping for materials:

And began to build...

There were so many creative solutions. Would they work?

Jack sure has some strong muscles!

I'll bet you're wondering why Jack looks a lot like Ken. Jack is actually Ken's cousin~!

It was finally time to test using plastic eggs. One by one our engineers tested their designs by first attaching them to Jack and then racing to the bottom of the beanstalk hoping the egg would not fall out of the carrier!

After waiting an extra week while the Giant recovered from a stomach bug (probably ate too many Englishmen!) We were able to test our re-designed egg carriers. Some needed to be improved and reimagined.

Our amazing engineers successfully designed several egg carriers that safety transported the golden eggs to the ground. We only had a few casualties!

This is the blog for the weekly STEAM time at Ottauquechee School. We are excited to share with you the creativity, tinkering, designing and building that takes place in the school during this special time! 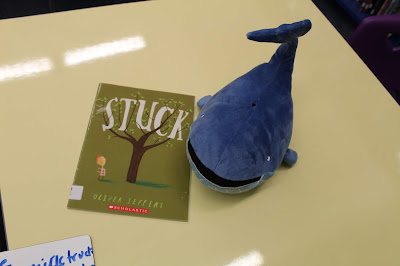